At the beginning of the year, I became Medals4Mettle Washington, DC Chapter Coordinator. On April 13th, I did my first medal donation for my chapter at Georgetown University Hospital. As a special bonus, local runner and elite endurance athlete, Michael Wardian, joined me to help pass out medals. We had a blast and met some really awesome kids. Below are a few pictures from our hospital visit. 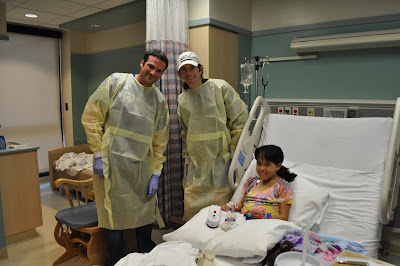 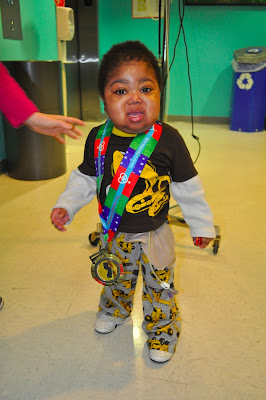 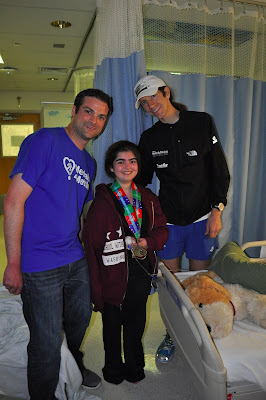 Following that weekend, tragedy struck at the Boston Marathon. I, like many other runners, was left in disbelief. How could something like this happen? I began to worry about the runners I knew running in the race. I knew Michael and my friend and featured runner on my blog, Ali Hatfield, were running in it. I spent the afternoon glued to my Twitter feed and news reports. Thankfully, I learned that Michael and Ali were alright. (Ali wrote a pretty powerful blog about her Boston experience and I encourage you all to read it.)

When I got home from work that evening, I went for a run. I felt that running was the only thing I could do to show my support to everyone in Boston.  It seemed I wasn't alone. Soon, #runforboston was trending on Twitter. The whole world was running. Everyone uniting to run for Boston was the only glimmer of light on such a dark day. The running community never ceases to amaze me.

Later in the week, I wrote up a blog asking local Washingtonian runners to join me for a Boston Marathon tribute run on Saturday on the National Mall. Through word of month and social media, my post racked up over 800 hits by Saturday. Local news stations caught wind of my run and when I arrived at the meet up location on Saturday, I was surprised to see that a couple new stations had showed up. About 30 runners came out, most dressed in Boston colors.

After a moment of silence, we set off for our run around the National Mall. It was a special experience for me. It was a true honor to lead this awesome group of runners on our tribute run. Thanks to all that came. Fox's DC station did this awesome piece on the run, which can be viewed here. Note: They asked me to take off my running hat during my interview, so please enjoy my crazy hair. 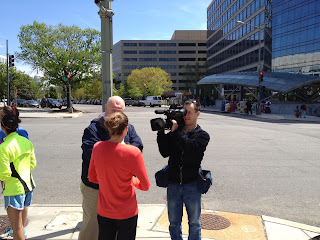 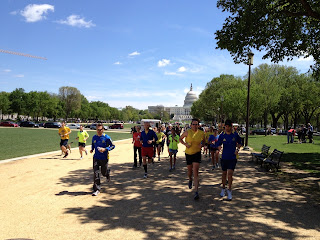 Looking ahead, I have a lot of fun races coming up. The first weekend in May I'll be running in the Flying Pig Marathon in Cincinnati. Then, I'm off to Maine (just south of Portland) the following weekend to run in a small town marathon. Come June, The North Face Endurance Challenge Series comes into town. I've run in this race the last two years (the marathon in 2011 and the 50K in 2012). This year, I've decided to up the ante again and I signed up for the 50 miler. The North Face always does a fantastic job hosting this event and I'm sure this year's race will be no exception.

It has been a tough week for the running community and I hope everyone has been doing alright. My thoughts remain with all those affected by this tragic event. I will continue to run for them.
Posted by Doug Cassaro at 5:53 AM
Email ThisBlogThis!Share to TwitterShare to FacebookShare to Pinterest