Readers beware, this is a long one. Grab a beer/glass of wine, or both! Also, please excuse any typos. I was pretty tried when I typed this up! Enjoy!

Ahhh, my first trail race... something I had been wanting to try for awhile now. Over the years, I have run my fair share of road marathons, but on Saturday I traded the pavement for dirt, mud, creek crossings, and some wicked uphill climbs.

The North Face has a series of endurance events across the country and one stop is right here in the DC. In addition to the marathon, there was also a 50K (31 miles) and a 50 mile race. One of the many things that attracted me to this event was the fact that Dean Karnazes, a North Face athlete (and my running idol), was going to be there!

The real fun began Friday night when I got the chance to personally meet Dean after a pre-race panel discussion at the North Face store in Georgetown. I was certainly a little star-struck when I spoke to him, but it was awesome to meet him. I told him how he inspired me to run my first ultramarathon and he replied jokingly, "I hope you still like me." 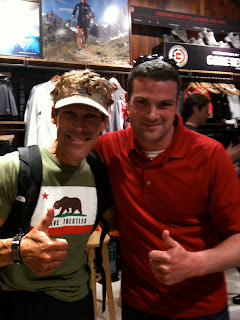 Dean stuck around the store until every last person got a picture with him. He is a real down to earth guy that cares deeply about running and wants to share his love of running with everyone around him. I hope I cross paths with him again in the future!
The days leading up to the race were really hot and humid and that had me a bit concerned. Luckily, as the weekend approach, cooler temperatures prevailed. The start/finish area was located in the beautiful Algonkian Regional Park, which is situated along the Potomac River. The course, a 13 mile out and back (or so I thought, more on this later), utilized many parts of the Potomac Heritage Trail. 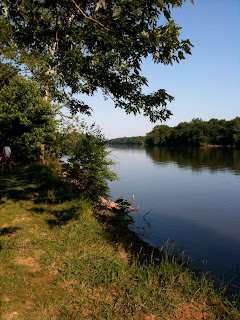 The race started promptly at 9am. Before the race began, Dean provided us all with some words of encouragement. As I passed under the inflatable archway to begin my 26 mile trek, I noticed Dean off to the side giving runners high-fives. I made my way over and traded a high-five with him! How often do you get the chance to high-five you're idol at the start of the race???
My race strategy was pretty straight forward, finish and stay hydrated. The temperature was hovering around 70 at the start, but I knew it would only get hotter. So, staying hydrated was going to very important during the race. The aid stations were spread out about every 5 to 6 miles on the course, so I decided to wear my hydration pack. This turned out to be a really good decision.
One thing I noticed right away was that it was damn near impossible to hold a steady pace. The course terrain was always changing. Some parts of the course were flat, but for the most part, it was filled with little ruts just waiting to roll an ankle and tree roots that would catch your foot and send you flying if you weren't careful. Also, the majority of the course was singletrack, which provided little room for runners to pass each other. The scenery was absolutely gorgeous. However, I was so concerned with my foot placement that it was hard to look up and fully appreciate it. Below are some images I snapped of the course. 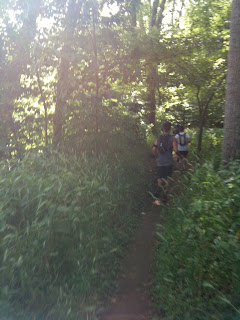 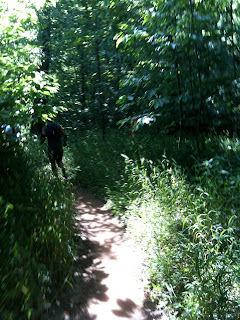