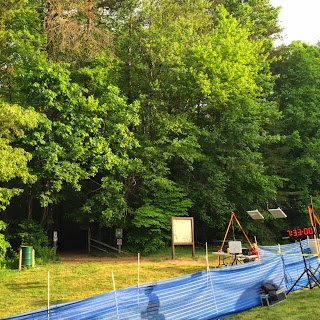 On Saturday, I ran EX2’s Fountainhead Half Marathon, a race I had run last year. EX2 races are always well managed and the race director is super friendly. Minus the staggering humidity, it was a great day for a trail run. The race was held at Fountainhead Regional Park along the Bull Run/Occoquan Trail (a place I train often). I would classify the Bull Run/Occoquan Trail as a mostly non-technical, well groomed single track with some rollers to keep your quads honest.

Coming into this race I had an A, B, and C goal. My A goal was to place in my age group. My B goal was to finish under 2 hours and my C goal was to beat my time from last year - 2:05:31. I knew achieving at least one of those goals would be possible, but I secretly wanted to land my A goal. Since The North Face 50K last month, my training has been going really well. My legs have felt good on my hard days and I’ve been recovering quickly. I’ve also been better about incorporating more speedwork and hill training into my runs. But, I mostly blame that on the fear The Rut 50K (11,000 feet of vertical gain) is already instilling in me, and that race isn’t until Labor Day weekend! I digress.

I went out hard at the start with the front runners to avoid the mid-pack congo lines on the single track. The first half mile of the course was on a road, so by the time I reached the trail, things had stretched out nicely at the front. I dialed back my pace, fully expecting to get picked off by some of the runners behind me. But, to my surprise, I was able to maintain my position.

Around the halfway point of the race I noticed I was running all alone. At times I would question whether I was off course, but then I would spot a piece of pink surveyor tape dangling from a tree branch. Those solo middle miles were really enjoyable for me. The morning birds were chirping, the trees around me were lush and full of life, and I was in a good rhythm.

About 3 miles from the finish, I ran past a race volunteer that told me I was 16th overall. That motivated me to keep pushing. Near the end I caught up to and passed 3 runners to finish 13th overall in 1:58:55. According to my Garmin, the course had about 1,500 feet of vert, which made for a nice mix of flat and rolling sections. I wasn’t sure if I finished high enough to place in my age group, but to my delight, I achieved my A goal by placing 3rd! 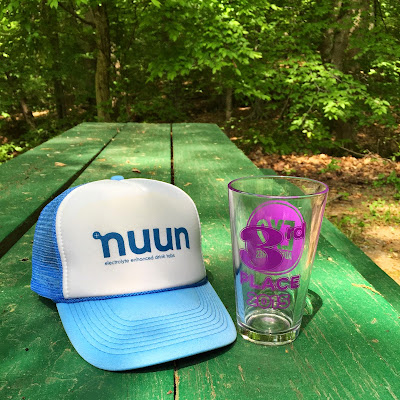 The following morning I met up with my friends Chad, Kristy, and Carolyn for the Capitol Hill Classic 10K. The humidity was even higher for this race and the skies were full of rain clouds that never came through with some much needed relief. My legs were feeling fresh from my half so I decided to give this race a good go too. I started around a 7:30 min/mile and didn’t stray too far from that throughout the race.

The race started in Stanton Park and after running between the Supreme Court and The Capitol, the course followed East Capitol Street all the way to RFK Stadium. Beautiful trees and homes line East Capitol, which made for a scenic race setting. After looping around RFK, the course returned to East Capitol and then onto the finish back at Stanton Park.

I finished in 46:26, happy to be done. It was so humid! Chad, Kristy and Carolyn all had great races too! Afterwards, we walked back to Kristy’s place and stuffed ourselves full of eggs, blueberry pancakes, doughnuts, coffee and mimosas. All in all, it was a great weekend of running! 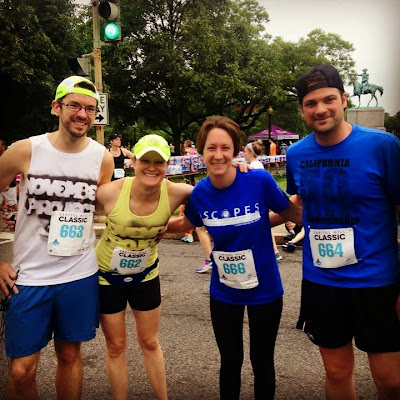 Posted by Doug Cassaro at 10:27 AM No comments:
Email ThisBlogThis!Share to TwitterShare to FacebookShare to Pinterest
Newer Posts Older Posts Home
Subscribe to: Posts (Atom)