Once and awhile you run in a marathon that sucks. The organization is poor. The course isn't well thought out. The volunteers are cold and leave you wondering why they even came out to help. Locals find the race to be disruptive and an inconvenience.

Let me tell you, the Flying Pig Marathon in Cincinnati was none of these. From the moment I was greeted at the Flying Pig Welcome Center at the airport till the time I crossed the finish line, I was thoroughly impressed. The folks that organized this event knew how it should be done.

I decided to sign up for "The Pig" rather late. My good friend, Drew, lives in Cincinnati and he and his wife just had their first baby, Cole. I was anxious to meet the little guy and Drew mentioned to me that I should come out and run in the race. It doesn't take much persuasion to get me to do things like this, so I was in!

I landed in Cincinnati Friday afternoon and Drew met me at the airport. Later that evening, Drew, his wife, the little one and I walked down to Hyde Park for some ice cream (yes, I fuel my runs with ice cream). A section of the course goes through Hyde Park and when we got down there, I noticed a nice touch by the Flying Pig staff, official course marker signs. I thought that was really cool and something I had never seen done at a race before. 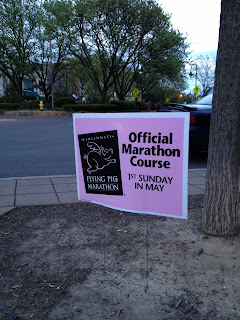 After a relaxing Saturday at the expo and walking around downtown Cincinnati, it was time to get some rest. The marathon started at 6:30AM, so I was up and at it early. Drew dropped me off at the start with plenty of time to kill before I needed to get into my pig pen (corral). The course started behind the Bengals football stadium and wrapped itself around downtown and even part of Kentucky before it sent you up into the hills. While some are not the biggest fan of hills, I like them. So, I found this part of the course to be pretty enjoyable. Besides, the view you got of the city at mile 7 makes the climbing well worth it.
Miles 14 through about 17 were without a doubt my favorite part of the course. It was here that the course went through the community of Mariemont and their residents were out in full! Many people were having little block parties throughout this section and it was awesome to run through it all!

Things got a little quiet from miles 19 to 25.  However, the volunteers at the aid stations during this part were lively and full of energy, which helped make up for it. In fact, the volunteers were awesome throughout the entire race. My thanks to all of you!

The stretch to the finish was electric. Cheering and enthusiastic spectators lined the course and you couldn't help but move your legs faster. As I neared the finish swine (aka finish line) my mind wandered to the events that took place at Boston. The whole race weekend was full of Boston love and support and crossing the finish line was pretty special.

What happened in Boston didn't deter anyone from running. In fact, the outpour of support was so big after Boston that both the marathon and half-marathon ended up selling out. I love my running family and I'm very proud to be a part of it. I will continue to run this year with Boston in my heart and on my wrist, thanks to these awesome, pig-inspired, Boston Strong wristbands! I would recommend running the Flying Pig Marathon to anyone. Absolute first-class event from start to finish! 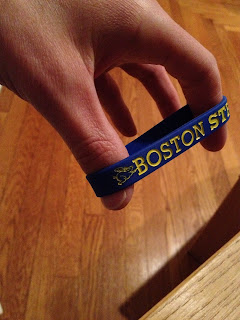 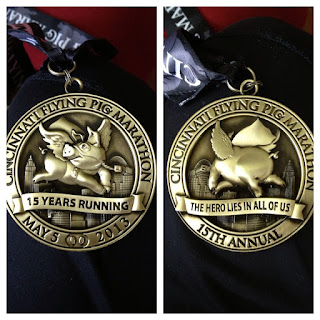 My Garmin upload
Posted by Doug Cassaro at 7:25 AM
Email ThisBlogThis!Share to TwitterShare to FacebookShare to Pinterest