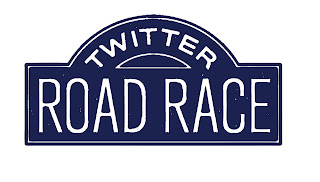 Start your fall off right and join us for the Fall Twitter Road Race! The race is going to held on Saturday, November 3rd! You want in? Click here to register!

This will be the fourth time I'm hosting the TRR. In past races, the distance has been a 5K. But, for the fall race I've created a poll (see sidebar) so you can vote for what you would like the distance to be! The poll will be open until September 30th so place your vote soon!

I'd like to welcome all returning TRR finishers. Glad to have you back! If you're new to virtual racing or the TRR, here's what you need to know:

On race day...
1) Head out your door.
2) Run the race distance.
3) Post your time on the finishers form that will be posted on my blog.
4) Tweet about your race experience using the hashtag #TwitterRoadRace.

To be counted as an official finisher, you MUST enter your time on the finishers form by 11:59PM Hawaiian-Aleutian Standard Time (HAST) on race day. No time. No result.

Be sure to spread the word about this race using the hashtag #TwitterRoadRace. It's been a pleasure to host these races throughout the year and I look forward to having another great race this fall! See you on race day!

Doug
@seedouglasrun
Posted by Doug Cassaro at 5:58 PM No comments:
Email ThisBlogThis!Share to TwitterShare to FacebookShare to Pinterest

72 days before the running of this year's New York City Marathon, race organizers (NYRR) announced that there would not be a baggage check for the race to "ease finish-line congestion." You can read the official announcement here. Immediately, there was an uproar of angry comments on Twitter and Facebook from runners about this new policy and who could blame them?

We have grown accustom to having a gear check at most - heck, if not all - major road races. To think that one of the world's largest marathons is getting rid of their baggage check is pretty crazy. Having run the NYC Marathon in 2010, I agree with NYRR that the congestion after the race is pretty horrendous. I also agree that something should be done to fix this issue. But, surely there is a better way to do it then this?

This new policy really hurts the runners that are traveling to this race alone. They don't have the option of having their friends and/or family hold on to their belongings at the finish line. For them, they are stuck wearing their racing gear, probably now full of sweat, until they make it back to their hotel. I don't know about you, but the first thing I want to do after a marathon is get out of my nasty running clothes and throw on a pair of comfy flats.


In order to minimize inconvenience to our runners, NYRR has invested in a number of enhancements, including:

My thoughts? I hope those ponchos are as luxurious as they sound. However, something tells me when you have to buy 45,000+ of those things, they aren't going to be that nice. Sure, they might keep you dry (well, keep you from getting more wet since your running attire will probably be sweat-laden). But, I wonder how "warm" they will be?

"Call Home" stations? Has any other marathon ever done this before? So, instead of waiting in line to get your checked baggage, you get to wait in a line to use a phone that thousands of other sweaty faces have touched? Fun.

Maybe I'm making a bigger deal out of this than need be? But, I really think NYRR could have come up with a better solution than this. I also don't like how NYRR introduced this new policy MONTHS after the field was set. Something this big should have been mentioned when the lottery was still open. I think it's unfair to drop something like this on the runners so close to race day. In my opinion, they should have waited until 2013 to implement this policy.

As you can tell, I'm a little heated about this and I'm not even running in the race! So, I'd like to open the floor to all of you, especially if you're running the marathon. What are your thoughts on the 'No-Baggage Policy' for the NYC Marathon? Agree? Disagree? Don't care? I'd love to hear from you!
Posted by Doug Cassaro at 7:39 PM 2 comments:
Email ThisBlogThis!Share to TwitterShare to FacebookShare to Pinterest
Newer Posts Older Posts Home
Subscribe to: Posts (Atom)