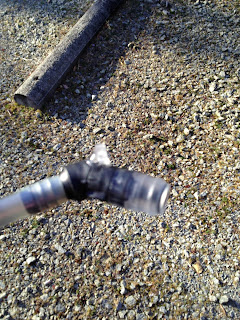 This race lived up to its name! The temperature was in the low 20s at the start and it didn't warm up much throughout the day. The mud on the trails was frozen solid and gave my feet a good beating. The nozzle on the hose of my water pack froze and I would have to hold it in my mouth and wait for it to thaw out so I could drink my water. It even formed an icicle on it!

Sounds awful, right? Nah, it was awesome! Timed ultras are a lot of fun. Instead of running until you complete the official race distance, you see how many miles you can run in the allotted time. I say this time and time again, but if you're interested in running an ultra, I highly recommend it! It's a totally different race experience and the runner camaraderie is awesome!

A couple weeks before the race, the race director emailed all the runners with a cool idea. Since the race fell on Groundhog Day, he created a special Groundhog Day division. The race course consisted of two loop options, 5 or 8 miles. Runners were allowed to combined loops and run each loop in either direction, if they wanted to. However, if you signed up for Groundhog division, you had to commit to one loop and you had to run it in the same direction throughout the race. I liked the idea, so I signed up for the 8 mile loop.

The race was held at the Lake Anna State Park in Spotsylvania, VA, which is about 1 1/2 hours south of DC. I used this race as a training run in preparation for my 100 miler next month. I figured this race would be a great opportunity to run a longer distance on the trails. My goal was to get in 40 miles, or 5 laps around the long loop. I started off at a 10 minute pace and was able to maintain that for a good portion of the race. I tried my best to limit my transition time after each lap so I could maximize the race time available.

About halfway through my 4th lap, I was starting to hit a slight wall. Hills that didn't seem so steep on the earlier laps were now harder to get up. When I started my 5th and final lap, my legs were pretty toasted and I thought that I was in for a hard lap. But, when running an ultra, you go through periods of time when you feel like complete shit and times when you feel fresh as a daisy. When I was about 36 miles in, I began to bounce back. I was able to put in some nice miles at the end and had a real strong finish!

I was glad to be done, but also happy that I still felt fairly fresh. I knew in the back of my head that if this was my 100 miler, I would still have 60 miles to go [gulp]. Once I changed into some dry clothes, I hopped into my car, blasted the heat, and began to thaw out. About an hour after the race ended, the award presentations began. The winner ran a total of 53 miles! When it came time for the Groundhog Day division awards, I was stoked when I heard my name called as the 2nd overall finisher. The race director had handmade wooden plaques made for the Groundhog division which were pretty sweet looking. I hope to run this race again next year! 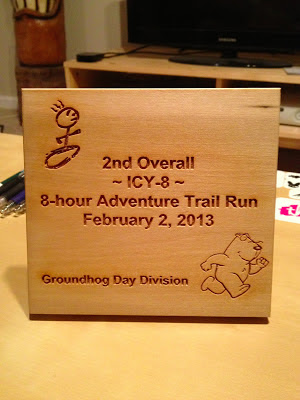 Posted by Doug Cassaro at 7:38 PM
Email ThisBlogThis!Share to TwitterShare to FacebookShare to Pinterest