Before the race began, race directors Tim and Matt promised us all an adventure. With only 30 runners toeing the start line (and another 30 for the 50K), it was certainly the smallest race I'd ever participated in...and I loved it!

The ultra environment is a totally different running experience and I one I highly recommend to anyone considering stepping outside the marathon distance. On paper, it would seem that the ultra only differs from other races because of the distance. However, that's hardly the case. Take for example the packet pickup at Antelope; all it was was Tim sitting behind a desk issuing out our bibs and race t-shirts, while sipping on a beer. I find ultras more pure and very laid-back. Runners seem friendlier. Ultra running is about camaraderie. We all know that during a certain point in the race we are going to hit a low, yet we take comfort in knowing that we aren't in it alone. We are all out there on the course together, supporting each other on.

The fun for me really began the day before the race. I flew into Phoenix Thursday night and my friend Caitlin picked me up at the airport. Friday morning, we picked up her friend Rachel and we began our road trip to Page. Page is situated on the northern boarder of Arizona, just northeast of the Grand Canyon. The drive to Page was insanely gorgeous. We left the desert landscape and saguaro of Phoenix for the tall pine trees of Flagstaff. 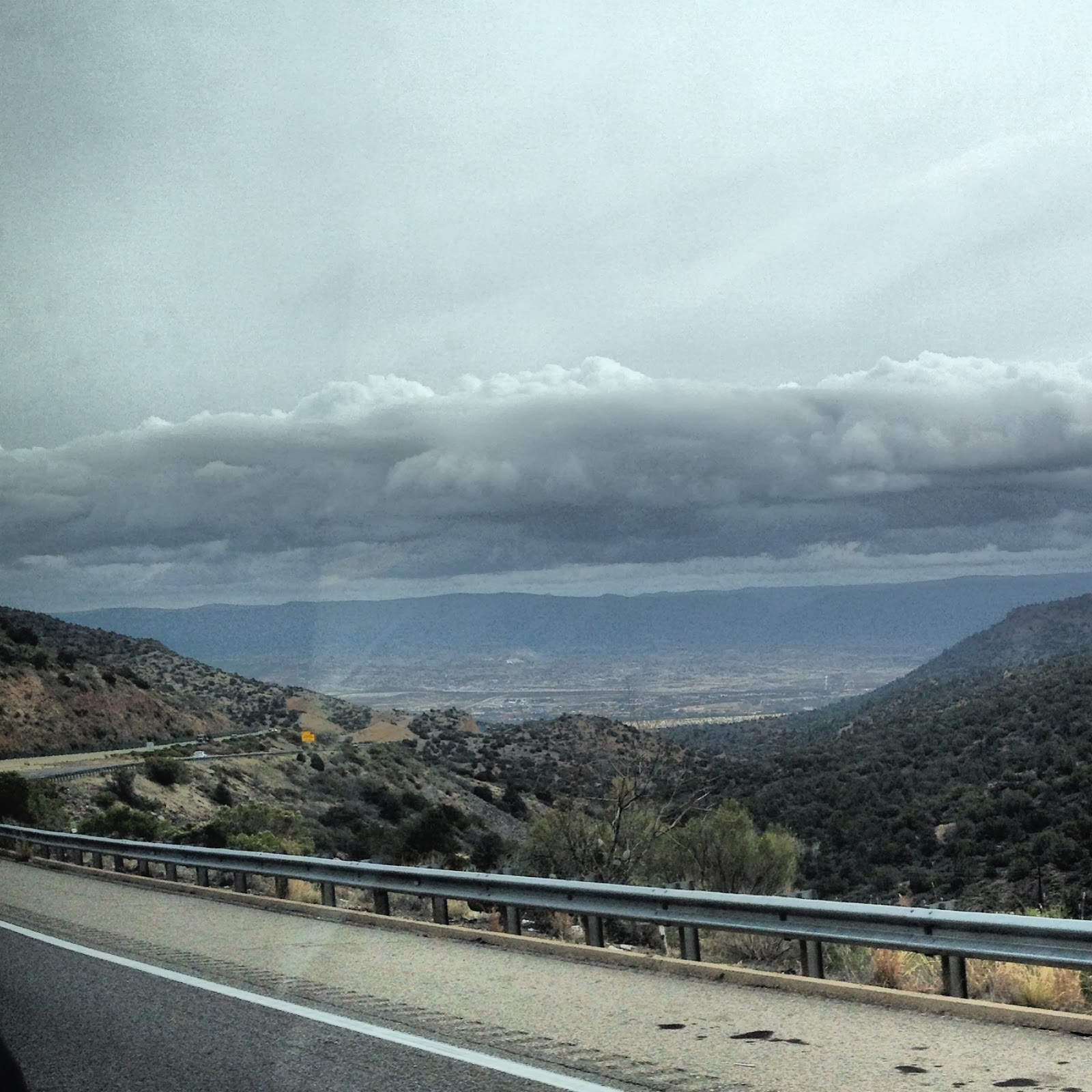 The change of scenery was really cool to see as we drove into the mountains. We even got caught in a snowstorm in Flagstaff! 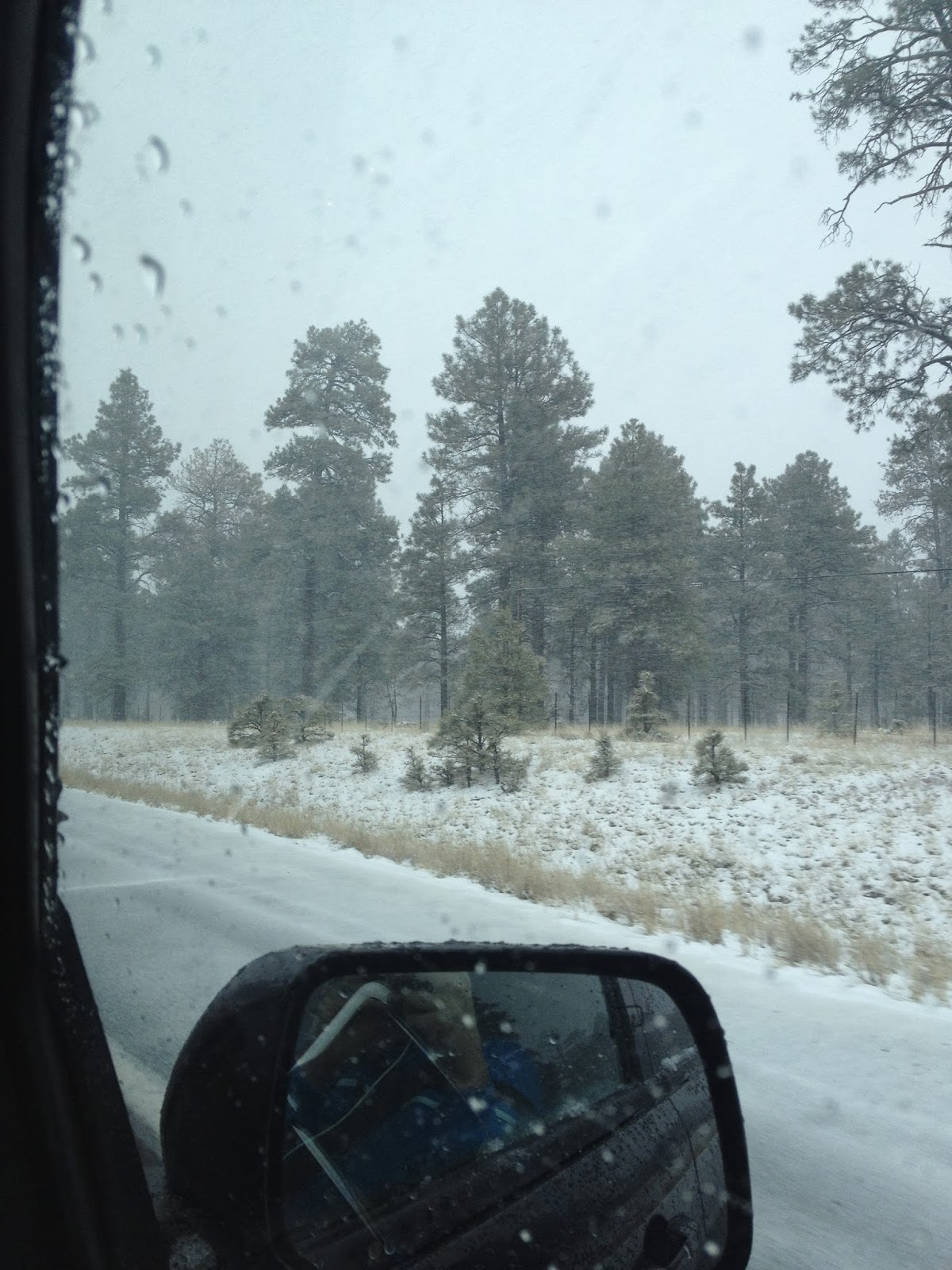 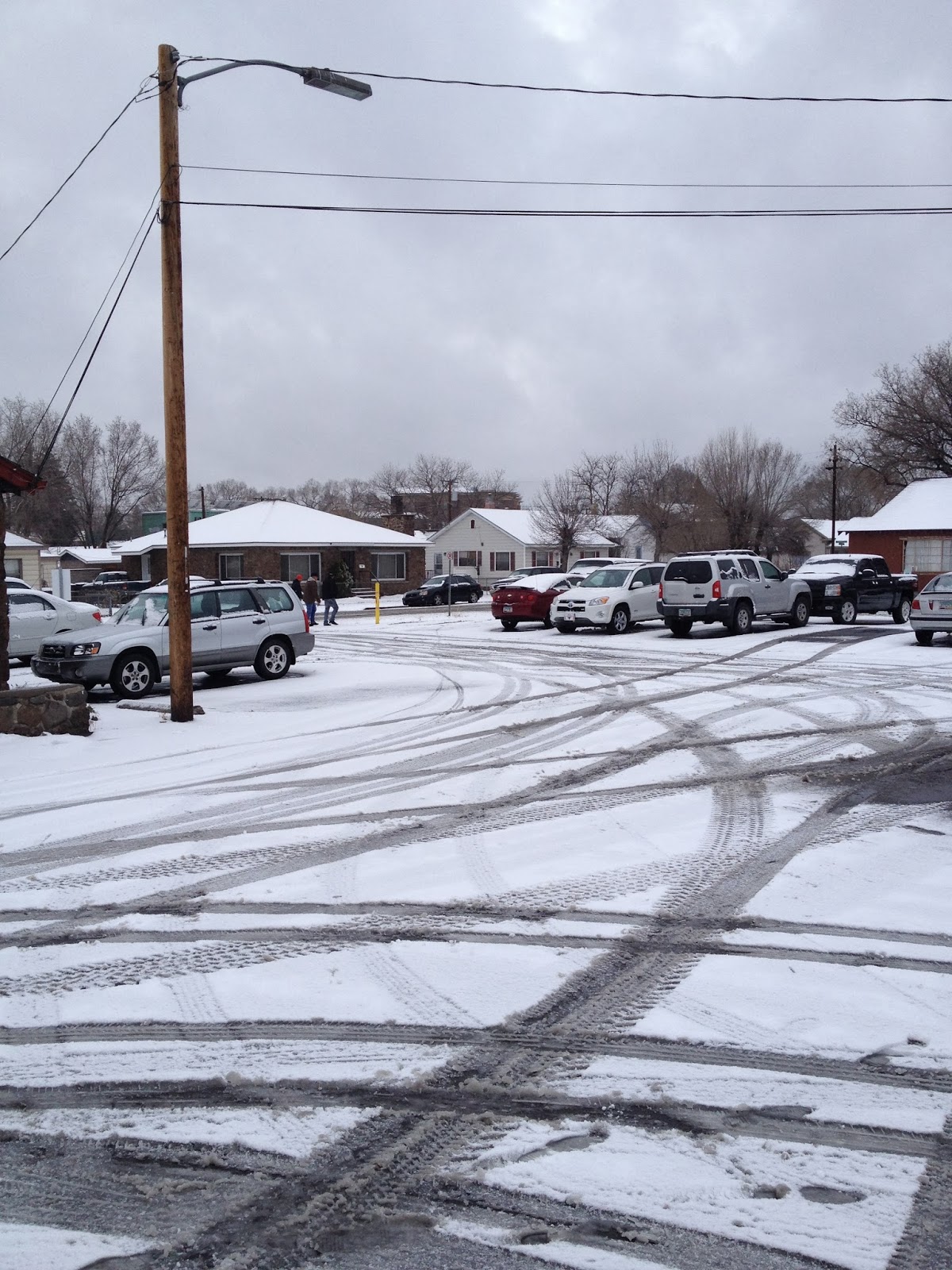 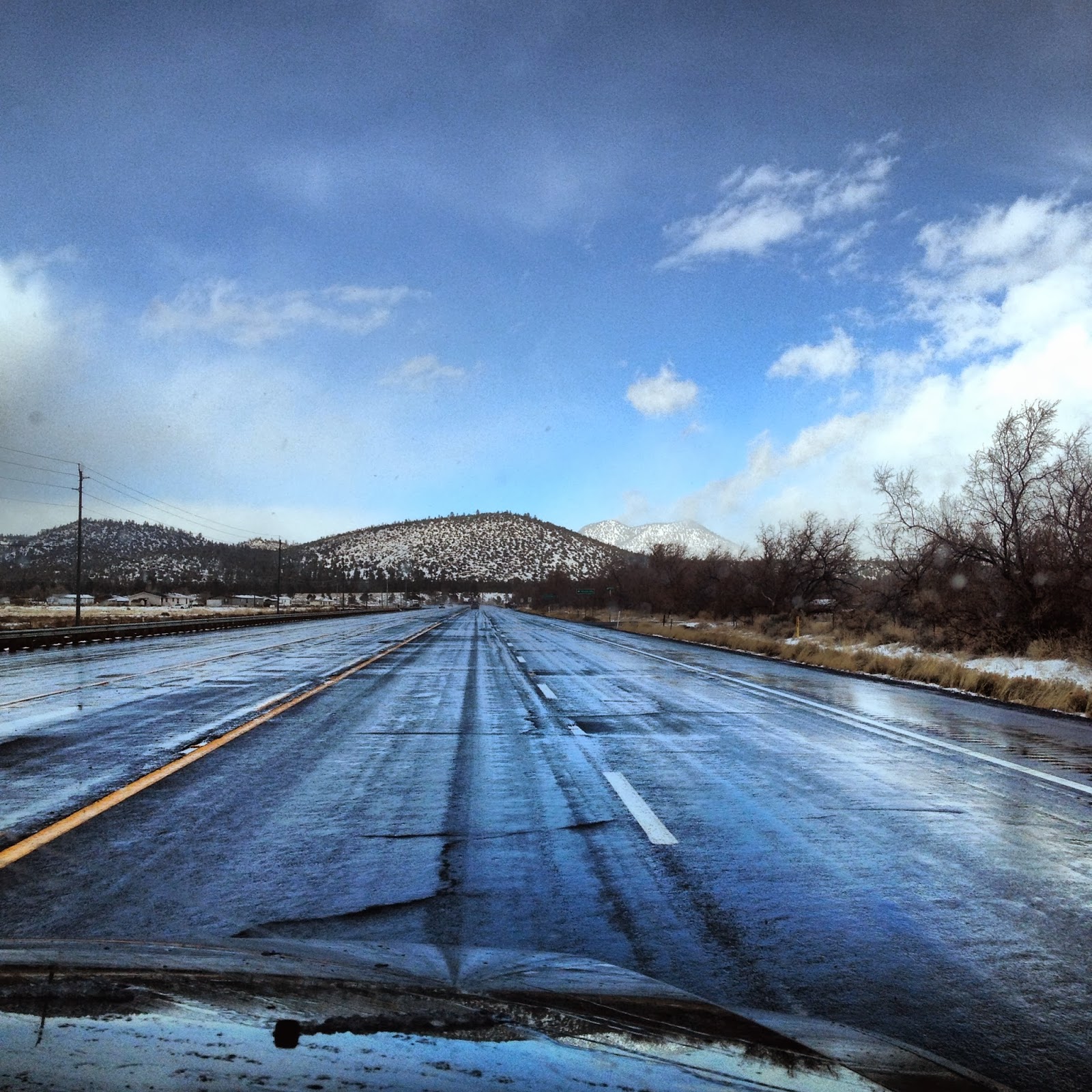 As we drove out of Flagstaff, we entered the northern desert of Arizona, also known as the Colorado Plateau. We were surrounded by brightly colored plateaus that jutted out of the ground and seemed to stretch for miles. The whole drive was a complete sensory overload! 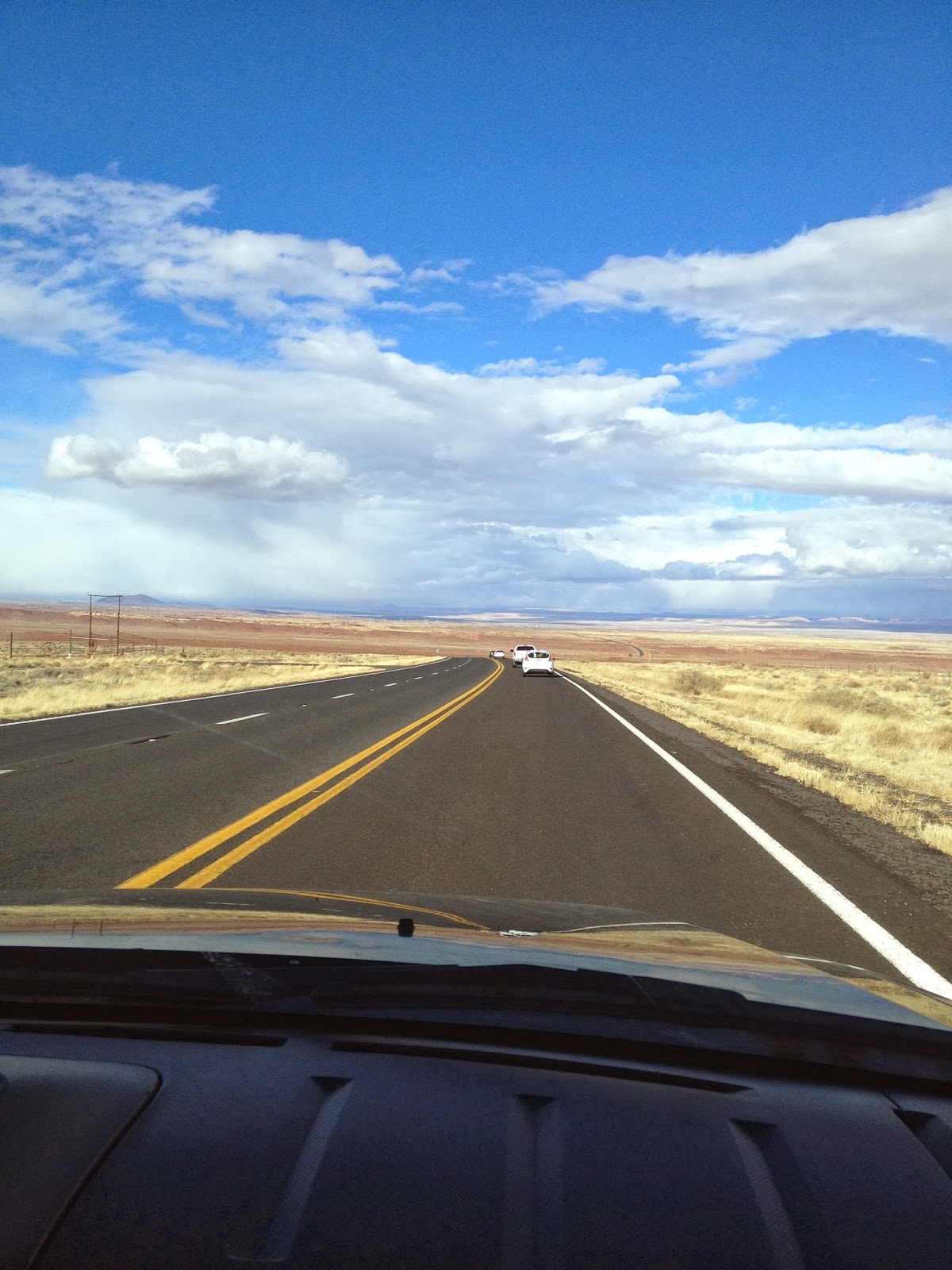 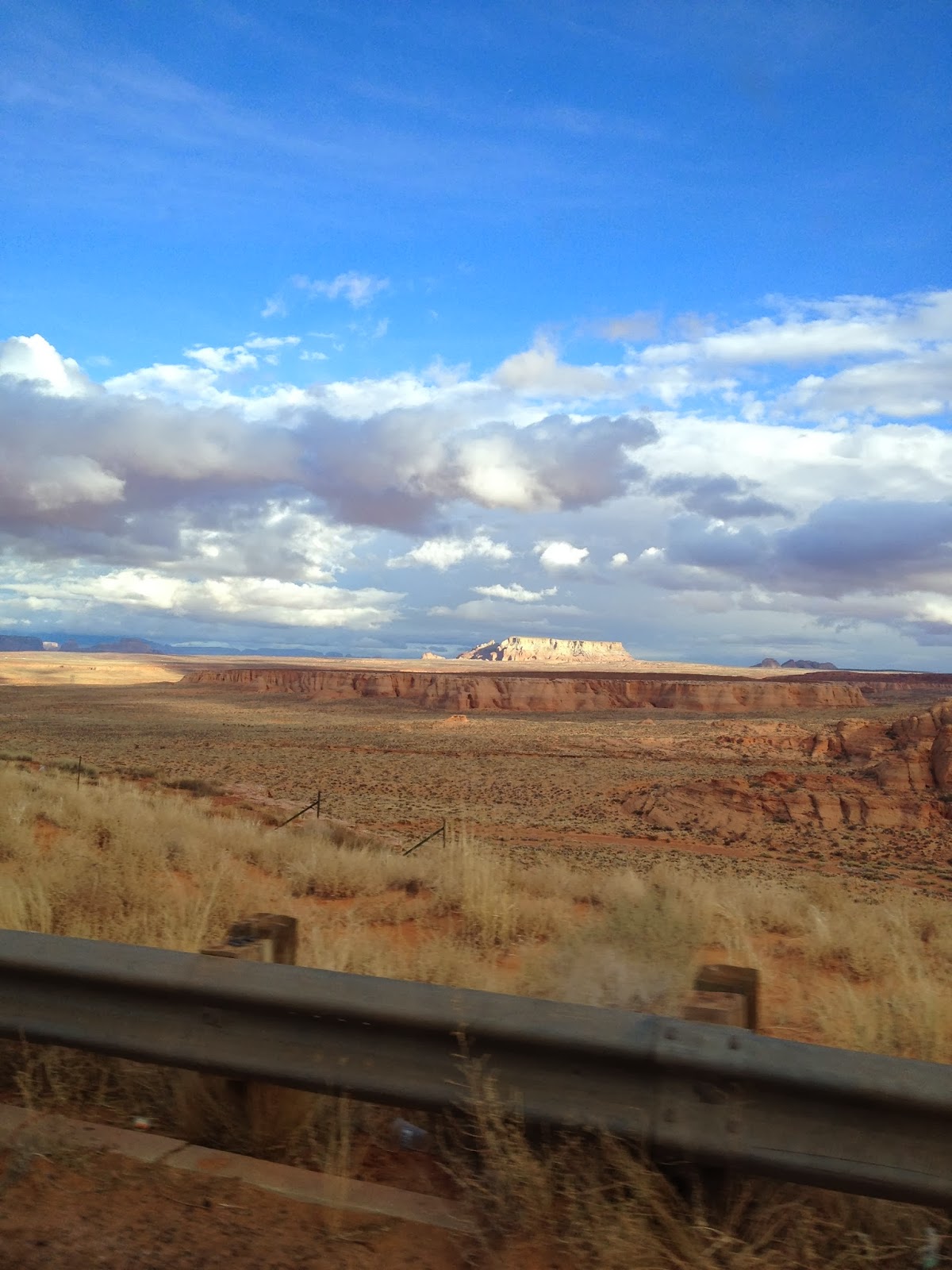 The race started at 6am, so it was an early wake-up call for us the following morning. We had another runner join the pack in the morning. Caitlin and Rachel's friend Elena had gotten in late the night before, but she was ready to take on the race! In fact, this was Rachel and Elena's first 50 mile run! Had it not been for recent foot surgery, Caitlin would of been running with us as well. However, being the lover of running that she is, she helped volunteer at the finish line.
After the pre-race brief from Tim and Matt, we set off into the darkness! After a short stretch down the quiet morning streets of Page, we entered the trails. We were warned earlier in the week that due to a lack of rain, the course was going to be very sandy. Luckily, the first few miles of the course were fairly hard packed. Before long, we entered the first of many breathtaking slot canyons. I had seen a few pictures of these canyons before the race, but nothing compares to running in them. It was by far the coolest running experience of my life. Some of the slot canyons were so steep that we had to use ladders to get down into them along with some crafty rock climbing skills (which I learned I have none of.)
By the time I reached the first aid station, a light snow had begun to fall. This was certainly unexpected, but a nice surprise. Rachel, Elena and I headed out of the first aid station and ran the next few miles together. As the snow began to fall harder, the orange sand under our feet and the red canyon rims that surrounded us began to turn white. It was here that we reached the famous Antelope Canyon. As Elena and I entered the canyon, we stopped dead in our tracks. What we saw around us didn't seem real, but it was. It left us both in complete awe and all we could mutter to each other was, "Wow!" 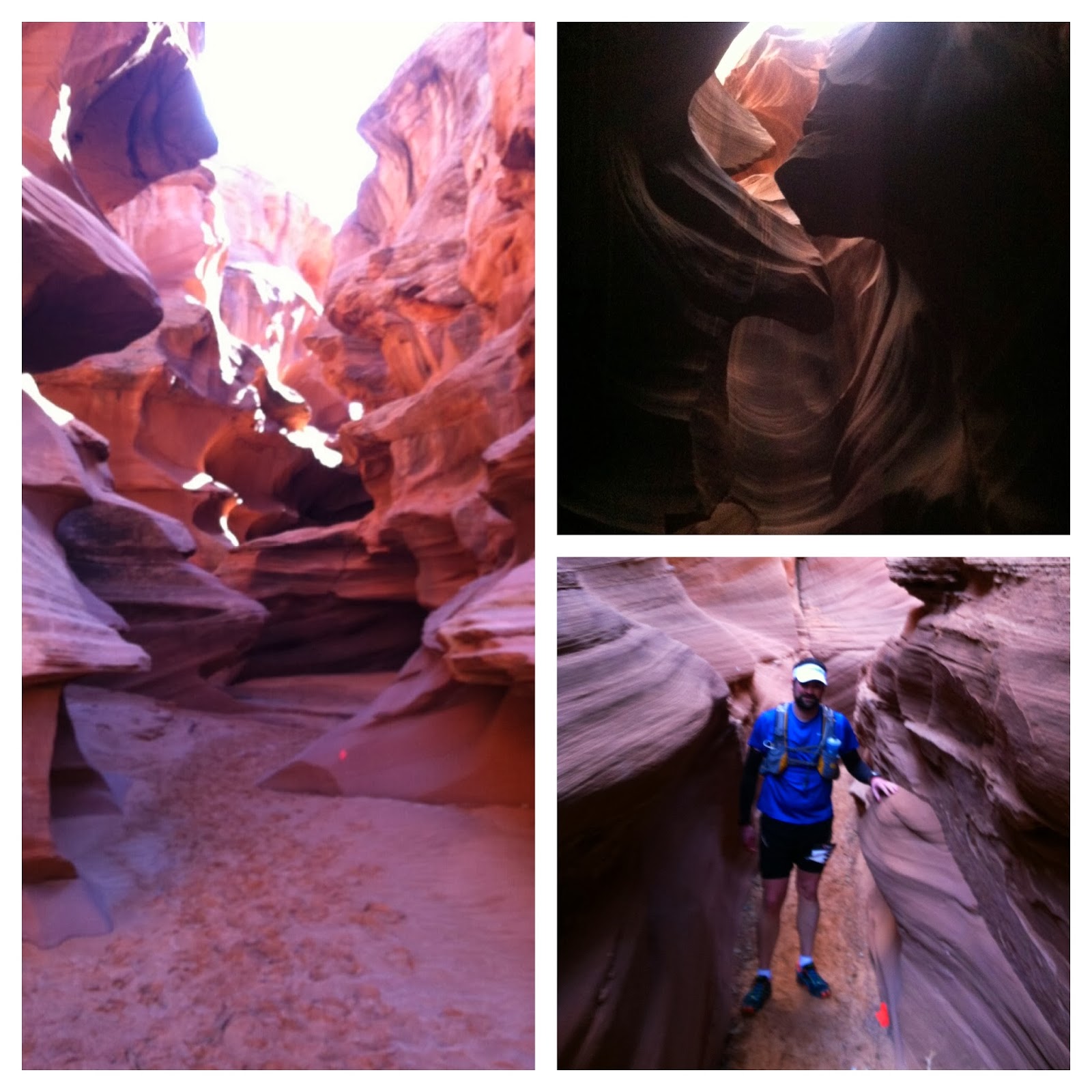 After Antelope Canyon, we retraced our steps back to the aid station we had just come from. After grabbing a little something to eat, I headed ahead of Rachel and Elena back into canyon we had run through earlier. The snow had begun to taper off and the sun was finally starting to stick its head out among the breaking clouds. It was about another 6 miles to the next aid station.

The interesting part about running on this course was that with the exception of the last 8 miles or so, we ran on unmarked trails. Most of the course was run on fire/ATV type roads, all of which were extremely sandy. While we were warned about the sandy conditions, nothing could prepare us for what we encounter. The sand simply ate up my foot with each step which made maintaining any sort of running form or pace nearly impossible. But, we were told that this race was going to be an adventure and if we wanted to see the gorgeous sights the course offered, we were gonna have to deal with the "not so fun parts."

I was happy to reach the Horseshoe Bend Aid Station around mile 21 and I was still feeling strong. I knew that the next stretch of course was going to be awesome, so I was eager to get in and out of the aid station. A few miles later, I reach the ridge of the canyon where Horseshoe Bend was. Horseshoe Bend was formed millions of years ago by the mighty Colorado River as it cut its way through the Arizona rock. It's sights like these that make ultra running so special. Ultra running gives you that rare opportunity to run among some of the most gorgeous scenery our country has to offer. In fact, what I saw was so beautiful that I couldn't help myself but to sit down for a few minutes and take it all in. It was too beautiful to run by and not stop and appreciate.
As I sat admiring the view, another runner caught up to me. We ran the next few miles together and shared stories about some of our recent races. We both noticed that course markings were becoming harder to find, which was odd because up until this point, they were very abundant. Then, we ran into two 50K runners that said they had been lost for about 30 minutes. Soon, more runners joined our pack of four, including Rachel and Elena. This part of the course was on slickrock, so there were no fire roads or sandy footprints to follow. However, with a solid pack of 8 runners working together, we slowly found the next course marking. Soon, we saw Matt in the distance waving and guiding us in the right direction. Shortly thereafter, we reached the next aid station, Water Holes.

Water Holes was about 29 miles into the race and my legs were definitely starting to feel it. However, Rachel and Elena where still looking very fresh and took off a little bit ahead of me. After leaving Water Holes, we dropped into the last and longest slot canyon we would run through. The slot canyon had many parts where we would have to climb the canyon walls and/or use ladders to make our way through it.

Climbing out of the last canyon, I could seeing Rachel and Elena ahead of me. As much as I wanted to catch up and run with them, my legs were pretty toasted. When I reached the next aid station (Horsebend for the 2nd time), they were just getting ready to leave. My drop bag was at this aid station, so I took the opportunity to dump the sand out of my shoes and change my socks. The volunteers were making homemade pizza, which was awesome! The aid station volunteers were great throughout the entire race. They play a big part in helping us get to the finish line.

Heading out of Horseshoe, there was about 15 miles left. Any sand I encountered took my already slow pace and brought it to more or less a crawl. While the next aid station was only 3 miles away, it took me almost an hour to get to. It didn't help that I managed to make a wrong turn during this part that added to my adventure. Yet, each time I was having a low, I would take a second and look around me. I was surrounded by some of the most amazing natural beauty I'd ever seen. Taking a moment to appreciate where I was reminded me why I was doing this race and helped me forget about the pain.

At the next aid station I noticed one of the volunteers wearing a race hoodie from the 100 miler I will be running this June. I chatted with him for a few minutes as I scarfed down some ramen he prepared for me. His tips for the race were insightful and hopefully I will be able to put the them to good use. Yep, leave it to me to think about my next race while I'm in middle of running one.

There was now less than 10 miles between me and the finish line. Thankfully, the sandy hell I was in only lasted for a few more miles. The final section of the course was along the Page Rim Trail, which was well groomed and hard packed. Unfortunately, my beat up legs couldn't make good use of it. My stride had shortened and it seemed like all my legs would give me was a 13 min/mile pace.
I had to put on my headlamp for the last couple of miles as it was getting dark again. Slowly, I made my way back onto the roads of Page that led me to the finish. The finish line wasn't your typical finish line fanfare (not that I minded). In fact, there wasn't even a line to cross. Just an empty table and a bystander that congratulated me as I finished. I didn't see Tim anywhere, so I headed inside the building where the bib pickup was. Sure enough, I found Tim and he ask me if I was done. I said I was and he recorded my finishing time. Caitlin was there too, as Tim had recruited her to pass out our handmade Navajo finisher necklaces and help record times. I later learned that Caitlin spent most of her day chatting with Tim about running, cheering runners on as they finished, and drinking beer. Not a bad volunteering gig, if you ask me!
My finishing time was 12:35. Rachel and Elena had great races and they finished together in just under 11:45! Awesome performances for their first 50 miler! Antelope Canyon is certainly a race I won't soon forget. Even though the sand was tricky and frustrating at times, it was an awesome course. Tim and Matt did a hell of a job putting on this race and I can't wait to run in their next event this summer, the Bryce 100! Also, my thanks to Rachel for sharing all her awesome race photos with me!

Posted by Doug Cassaro at 7:18 AM
Email ThisBlogThis!Share to TwitterShare to FacebookShare to Pinterest