Two Thousand Fourteen. Looks weird, doesn't it? 2014. There, that's better. 2014 is here. Well, its been here for like 3 weeks now....I just haven't got around to writing a post in the new year (or is it New Year?) so I thought it was time. I don't really have anything of importance to write, but I felt the urge to write (something I don't feel often) so here I am.

What's new? Not much really. I did recently get my first article published on a really cool trail and ultra running website, appropriately named, trailandultrarunning.com. That was something I had on my bucket list for awhile, so I was pretty happy to cross that off. I look forward to contributing more articles in the future. It's fun to support the trail and ultra community. It's something I've grown quite close to over the last year.

I ran in a 20k this past weekend and while I was about 7 minutes slower this year than last, I placed 3rd in my age group (I didn't place last year). But before I go patting myself on the back, the number of runners in my AG was pretty small. Still, 3rd is 3rd, so I'm happy.

Things I'm looking forward to in 2014? In the immediate future I am running in a 50 miler out in northern Arizona on Feb 1st. I'm meeting up with a friend and some of her friends in Phoenix and we are all road trippin' up to Page (it's like right on the AZ/UT boarder). The drive should be super scenic and I'm almost looking more forward to that than the race. But, I'm sure the race will be equally beautiful. No goals for this race other than to finish and have fun. Ok, that's a lie. I do have a secret goal, but it wouldn't be a secret if I told ya. Moving on...

My main focus for 2014 is my second attempt at finishing a hundred miler, aka, the hundo. My first hundo attempt didn't go so well, so I'm more determined than ever to finish this time around. However, I'd like to thank the ass (which would be me) that picked a hundo that starts at 7,500 feet of elevation, peaks at 9,500 feet and has over 19,000 feet of total elevation gain. For a guy that lives and trains for the most part at sea level, this wasn't my brightest idea. Then again, most would think running a 100 miles isn't too bright either. I digress. 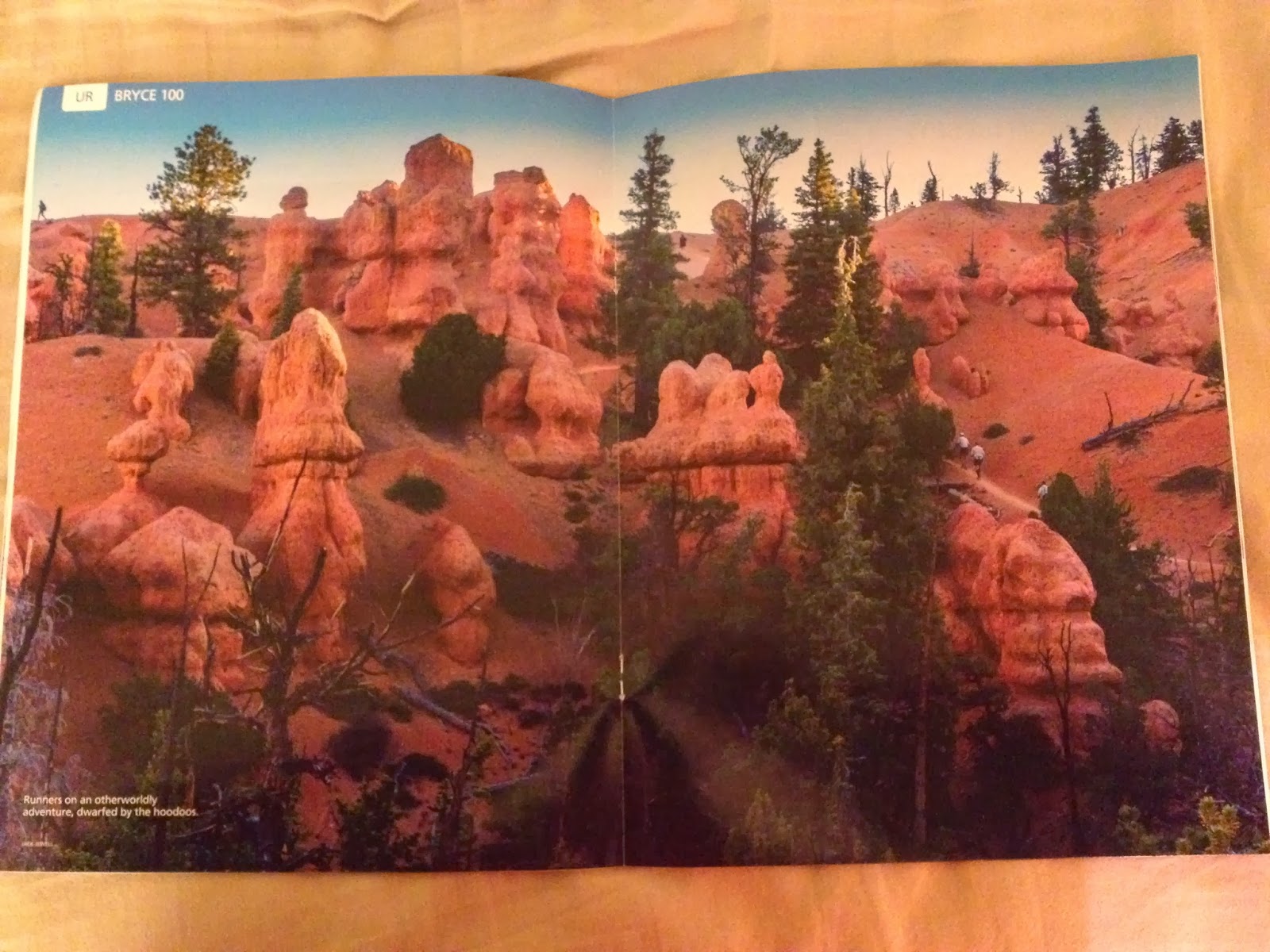 I was sold on the Bryce 100 the minute I saw this picture in an issue of Ultrarunning Magazine last year. I mean, how could I not run in a place this beautiful? So, I guess I blame the photographer that took this photo as well as the editors at Ultrarunning Magazine for making me sign up for this race.

In between my 50 miler next week and Bryce, which is in June, I have lots of other fun races to keep my racing hunger satisfied. Certainly, first half of my year is solely dedicated to training for Bryce. My 50 miler is at about 4,500 feet of elevation, so I hope that will give me a little taste of running at altitude. If I could get a training run in above 7,000 before Bryce, that would be awesome...but it probably won't happen. The tallest stuff near me is around 3,000 feet.

So, yea, that's the first half of my 2014 in a nutshell. What does your 2014 have in store for you? Comment and let me know!
Posted by Doug Cassaro at 3:09 PM
Email ThisBlogThis!Share to TwitterShare to FacebookShare to Pinterest