Note to readers: LONG post. Grab a beer before you start reading.

"I finally feel like myself." That's what I said to my friend Cathy right before the start of my 50 mile journey through the Marin Headlands in Northern California. Leading up to this race, I was a nervous wreck. I wasn't nervous because I didn't feel prepared. I was ready. I had put in 3 hard months of training to make sure of it. I wasn't nervous because of the distance. I had been beyond the 50 mile mark twice in my crazy running life. I was nervous because this was going to be the hardest course I've ever run on. 10,000 feet of climbing. 10,00 feet of descending. Aka, The Quad Destroyer (for me, at least).

But, once I had all my running gear on and was making my way to start line, my attitude changed. I was no longer nervous. I was calm. Confident. Determined.

At 5am, me and about 400 other kickass runners set off into the darkness. For the moment, all we could see was what our headlamps illuminated ahead. Yet, we knew that once the sun came up, we would be treated to some awesome sights.

I settled into a comfortable pace and focused only on reaching the first aid station, which was a little under 6 miles away. Thinking of only 6 miles to go instead of 50 did wonders for me mentally. It was a technique I used for the duration of the race. All I cared about was getting to next aid station.

As I headed out of Tennessee Valley (Aid Station 2), I no longer needed my headlamp. After a short climb, the trail dropped steeply down into a valley along the coastline, known as Pirates Cove. Seeing the vast Pacific and hearing the waves crashing into the seawalls was awesome. The trail along this section was pretty technical, so I couldn't look for too long, unless I wanted to face plant into the trail.

Once I made it to Muir Beach (Aid Station 3), I had about a half marathon under my belt. I was feeling strong, but knew that the next 15 miles or so would be the hardest part of the course for me. From Muir Beach, it was a steady 1,500 foot climb to the next aid station, appropriately named, Cardiac.

The stretch of trail from Muir to Cardiac was fantastic. While I had to walk most of it, the views kept on getting better the higher I got. The sun was now out in full force and the visibility was unlimited. If I looked left, I could see the Pacific. If looked ahead, I could see the runners in front of me snaking their way up the trail. To my right I could see the peaks and valleys of the headlands. If I looked behind, I could see the trail I covered, which make me think, "Wow, have I really climbed that much?"
I was happy to reach Cardiac because that is where my drop bag was. I looked forward to ditching my shirt for a nice, dry one. I took my time at this aid station. I even sat a for minute or two to rest. I made sure to refill my water pack and restock my Gu and Picky Bars stash. I also carried a 20 ounce bottle that I would put my Nuun tablets in.

Once I left Cardiac, the trail took me into a heavily wooded area that was absolutely gorgeous. A few rays of sunshine were able to sneak their way through the tree branches, illuminating the moisture that was hanging in the air. It was hard for me to believe that I was running in such a beautiful place.

After reaching McKennan Gulch (Aid Station 5), I was starting to hit a wall. From McKennan Gulch, it was very steep 1,800 foot decent to the next aid station, Stinson Beach. The decent to Stinson really jacked up my quads. If I have a running weakness, it's running downhill. I'm horrible at it. It was something I worked on during my training, but I'm far from perfecting it. Once I made it to Stinson Beach I felt like shit...not the way I wanted to feel a little over halfway into the race. To make matters worse, it was another steep climb out of Stinson back to Cardiac.

It was during this portion of the race that I started to question if I would be able to finish. My legs felt so depleted. "How can I run for another 20 miles feeling like this? I'll never make it back." I'm usually pretty good at keeping negative thoughts like these away, but I was hurting bad and it was hard to ignore them.

It was a slow, SLOW climb back to Cardiac. It was only a 3 mile stretch, but it probably took me an hour to get there and I don't recall running much during this part. I was relieved when I finally reached Cardiac, but I thought I was in big trouble. I still had 20 miles of climbing and descending to go and I felt pretty shitty. I took my time again at Cardiac. Every aid station had nice, hot chicken broth and I helped myself to two cups. While it might not sound too tasty, during a race it is euphoric. I remember hearing one race volunteer say that they are no longer going to call it chicken broth, because nobody running this race was chicken.

Leaving Cardiac, I thought I was destined for a long struggle back to the finish line. However, about a mile out from the aid station, I started to knock down my wall. I felt the strength returning to my legs. The length of my stride began to increase. I was bouncing back and I couldn't believe it. The run from Cardiac to Old Inn (Aid Station 8) was probably the most enjoyable part of the race for me. Upon reaching Old Inn, I downed a couple cups of electrolytes, ate a handful of M&Ms, and continued on my way. I had about 13 miles to go and I was feeling great!

From Old Inn it was another 3.5 miles back to the Muir Beach aid station. This section of the course was probably the flattest and I was able to put in some strong miles. I flew into the Muir aid station and took a short break to get some food in me. I overheard one of the volunteers say that we had another steep climb ahead, but not to let it discourage us. When I left Muir I had just 10 miles left. I could start counting down the miles on my hands!

The climb out of Muir was definitely steep, about 1,000 feet. But, the trail offered amazing views of the Pacific. Upon reaching the top of this climb, it was fun descent back into Tennessee Valley. I was still feeling strong.

When I reached the Tennessee Valley aid station, Cathy joined in to pace me to the finish line. All that stood between Tennessee Valley and the finish was 6 miles and one last climb. As Cathy and I headed out I told her that I hope she didn't mind walking the hills, because running them wasn't an option for me.
Once we got to mile 47, it was all downhill to the finish. I pushed myself as hard as could in the final miles. I ran my last two miles in 10:10 and 9:37, respectively. Having Cathy's company was much appreciated. We cracked jokes and chatted with the runners around us. The last few miles of race reminded me why I love trail running so much.
As Cathy and I neared the finish, I told her I was gonna hand her my pack. A month ago, I had rolled across the finish line of my 50K and I wanted to do it again. Finish line in view, I tossed her my pack. I stopped just short of the finish line, dropped to my knees, and gracefully rolled across. Race done! What an epic journey! Race time, 12:00:32. Whew!

For years, I've flipped through running magazines and seen pictures of runners running in scenic places. I always wondered when I would get the chance to be the runner in those photos. Today, I no longer have to wonder. The beauty that was around me during all 50 miles is hard to describe. I decided to run without my phone, so I unfortunately don't have any pictures from the course to share. However, it was probably best I didn't have my phone, cause I might still be out there on the course taking pictures!

I've never been disappointed with any North Face Endurance Challenge race I've participated in. I still haven't done their New York or Wisconsin event, but I'm pretty sure that this course is their most scenic. I highly recommend any of their events, with strong emphasis on this race if you want to challenge yourself and see some of the most beautiful sights you will ever see! 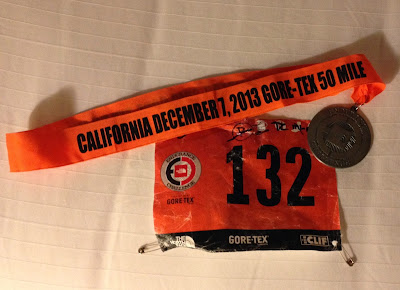 Posted by Doug Cassaro at 2:22 PM
Email ThisBlogThis!Share to TwitterShare to FacebookShare to Pinterest