The last 3 weeks have been quite a whirlwind for me. Lots of traveling and lots of running. November was all about getting in some key long runs before I entered my taper for The North Face 50 Miler this weekend in San Francisco.

Following the 50K I did a few weeks ago, I headed out to Philly with some friends to run in the Philly Marathon. I had never run Philly, but heard good things about it. I had no time goal for this race. I just wanted to get out there, log some miles and enjoy the marathon. In my opinion, the course was so-so. I will say, the first half was good. I would recommend the half to anyone. However, for the full, the second half was one huge out and back, something I'm not a fan of. While the scenery was pretty, it's tough to have something like that the last 13 miles of a marathon. Don't get me wrong though, the race staff did a great job and it was a very well managed race. However, it would be hard for me to sign up for the full in the future, unless they redesigned the course.

Following Philly, I headed to Boston for a business trip. While the biz trip was blah, the runs I went on at night were amazing. One night a ran through Harvard and along the Charles River. Another night and ran through Boston and retraced the last mile or so of the Boston Marathon course. I stopped a few times along Bolyston Street to take some pictures. It was bitterly cold both nights I went running and I was in heaven. Love me some cold runs. What a great city Boston is to run! 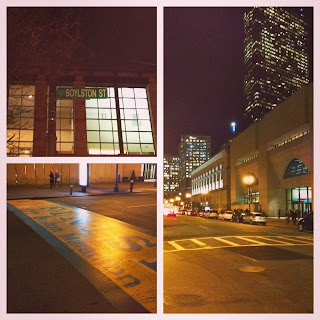 The weekend before Thanksgiving I was finally around to join my running club for a Saturday morning run. It was good to catch up with many running friends I hadn't seen in over a month. The next day I ran in a 5K hosted by my friend, Michael Wardian. Michael had just come off a 3rd place finish at the JFK 50 Mile the day before, but unless you knew, you wouldn't of been able to tell. He always looks so fresh. I don't know how he does it. The 5K was a lot of fun, albeit pretty cold and windy. Mike won and I finished 13th overall and 2nd in my AG, so I'll take it!

Then, like many runners across the country on Thanksgiving Day, I ran in a turkey trot. I was in my hometown for Thanksgiving, so a few of my friends joined me as well. Now, whether they wanted to hang with me or not at the race was another question, as I was dressed in a head-to-toe turkey costume. Gobble, gobble. I had never run in a costume before and it was loads of fun. Many runners got a kick outta me wearing such a ridiculous outfit and some even wanted their picture with me. The last 100 yards of the race was an all out sprint between me and a friend determined not to lose to a turkey. Turkey won. Mwahahaha! 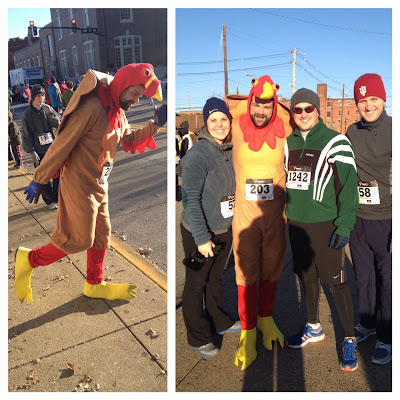 After the race I did what every turkey does, grab some Starbucks. 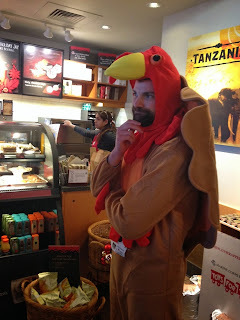 Over the Thanksgiving weekend I decided to go for a trail run in the Hoosier National Forest. It was an absolutely perfect day for a trail run and I was loving it until I rolled my right ankle 3 miles or so from my car. I rolled it pretty good, but thankfully I was able to run/walk back to my car. It definitely swelled up, but it seems to be getting better as the days go by. Hopefully it will be good to go for Saturday. Fingers crossed! 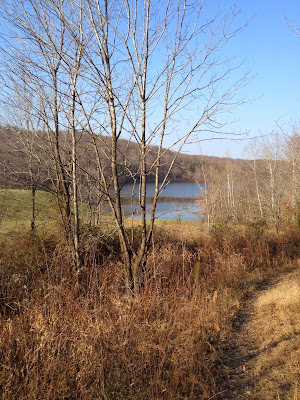 Speaking of Saturday, I cannot wait to get out to San Francisco! I've never been and I look forward to checking out the sights. This race is gonna be stacked with some of the best ultrarunners in the business. On the women's side you've got Rory Bosio (2013 Ultra-Trail du Mont-Blanc Champ), Ashley Arnold (2013 Leadville 100 Champ) and Emelie Forsberg (2013 UROC 100K Champ), to name a few. On the men's side, there's Dakota Jones, Max King, Rob Krar, and many more phenomenal male runners. To get to participate in a race with so many runners I look up to is pretty awesome. 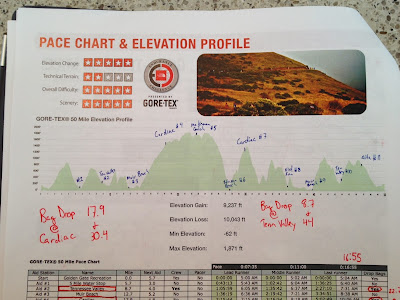 The race course looks wicked. I'd be lying if I didn't say it's scaring the shit out of me, but I think a course like this is suppose to. It's gonna chew me up and I can only hope it spits me out near the finish line! Minus my ankle, I have a lot of confidence going into the race. My fall training went well and I feel prepared. I just need to run my race, take care of myself, and get to the finish. Follow me along on my weekend adventures on Twitter. I'll be using #westcoast50.

Cheers!
Posted by Doug Cassaro at 4:04 PM
Email ThisBlogThis!Share to TwitterShare to FacebookShare to Pinterest