After having rough go at The North Face ECS Georgia marathon last week, I was looking forward to Wineglass. A few months earlier my friend Janine asked me if I wanted to join her. I had heard good things about this race, so it didn't take much convincing to get me to sign up.

Situated in the finger lakes region of New York, the Wineglass Marathon is a point-to-point run (my personal favorite) starting in Bath and finishing in the quaint town of Corning. With a net downhill, the course lends itself to be fast.

Janine and I arrived on Saturday afternoon and went straight to expo, which was held at the YMCA in Corning. After grabbing our bibs, we were directed to downtown Corning to pickup our wine glasses and (celebratory) champagne. The trees had already begun to change to fall and the streets and sidewalks were full of golden leaves. While the race had a fall look, it had a summer feel. Daytime temperatures reached the high 70s (maybe even the low 80s) all weekend.

Janine and I stayed at a bed and breakfast not too far from Corning. This was Janine's first time staying at one and it did not disappoint. The owners had the cutest terrier (Chloe) at the house and being the dog lovers Janine and I are, it was nice to have a little friend to play with. 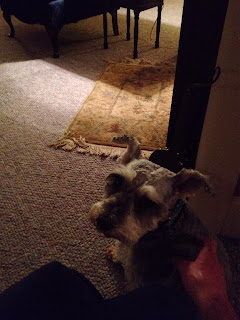 Early to bed, early to rise. We were up at 5 and out the door by 6. Parking was abundant in Corning and we got to the shuttle buses to the start line with plenty of time to spare. After a 25 minute bus ride, we arrived at the start line in Bath. Bag drop was a breeze and there were plenty of porta-pots, so the lines weren't too long.

The race started right on time at 8. While I had no time goal, Janine was gunning for a PR. Anything under a 3:47 would do it for her. We started off behind the 3:45 pacers. I had no intentions of running that fast, so I let Janine go and I settled into a comfortable pace. I opted to run without my Garmin. Better to let the body tell you what it wants rather than having a watch bark at ya.

It was raining ever so slightly at the beginning of the race and there was a nice chill in the air, but it wouldn't last long. The first few miles went through the streets of Bath. From about mile 5 until the halfway mark, the course went through the beautiful countryside of New York. If you're use to races where people are cheering and hollering the whole time, you're in for a surprise. Besides the cheers from the volunteers at the aid stations and the occasional car horn, it was just you, the road, and the sound of feet pounding the pavement. Just the way I like it. :)

I made it to the halfway point in 1:55 and I was feeling good. The rain was long gone and the sun was trying hard to stick its head through the clouds. Hydration was definitely important during the race and hats off the the Wineglass race crew...they had aid stations set up about ever two miles.

The course was absolutely gorgeous, especially the middle miles. The hills surrounding the course were covered in a tri-color blanket of leaves. Every now and again, you would run past a pasture of horses and cows. The scenery reminded me a lot of the countryside near the town I grew-up in in Indiana.

I picked up my pace from miles 13 to 20 and in hindsight, it probably wasn't a good idea. I was certainly feeling it in my legs and I had to ease off for the last 6 miles. Around mile 24 I saw Janine ahead of me and my heart sank. I wasn't running a sub-3:47 time, so I knew Janine was in a bit of trouble. When I caught up to her, she told me she was in a lot of pain. I tried to my best to find the words that would comfort her, but she was having a rough time. Nonetheless, she powered through it like a champ and we crossed the line together in 3:54:26! While it wasn't the time she was hoping for, it was still damn good! 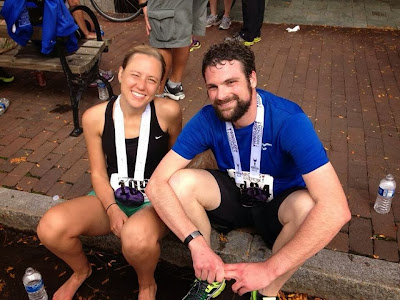 The Wineglass Marathon was a great event from start to finish. Very well organized and great on-course aid. Highly recommend it! 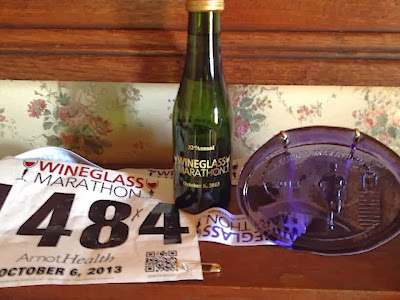 Posted by Doug Cassaro at 6:23 AM
Email ThisBlogThis!Share to TwitterShare to FacebookShare to Pinterest