I don't know where to begin. Running my first ultra was an amazing, unique experience. The Mind the Ducks 12 Hour took place on May 14th in Rochester, NY. I found the race location to be fitting, since this is where I was born.

I started training for this race started right after the New Year. Each month I was putting in some serious mileage to prepare my body for rigors of running for 12 hours straight. I was averaging about 150 miles of running in the months leading up to May, peaking at a little over 180 miles in March. My weekday runs ranged anywhere from 6 to 13 miles and I would put in 20+ mile runs on the weekends. I was also able to sneak in a few marathons during my training, which was nice.

Like any other kind of training, I had my highs and low. Some days I felt great. Other days I thought my knees were going to explode. Overall, I found my body responding well to the increase in mileage. 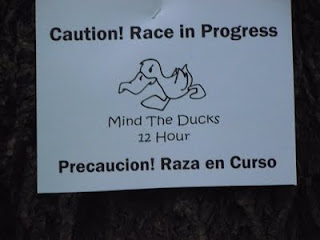 Early on, Matt told me how he wanted to come to Rochester and run the race with me. I was all for it! I definitely wanted to have some company for this race. The race was held on a Saturday, so we both decided to head up to Rochester on Thursday.

On Friday, we went for a light run to loosen up. Since the race site was not too far our hotel, we headed over there to check out the course.

Ah, the course. If people weren't already questioning my sanity for choosing to run for 12 hours, the course description would certainly put them over the top. The course was a 1/2 mile loop around a lake (a pond, really) at a local park. I didn't mind it though. 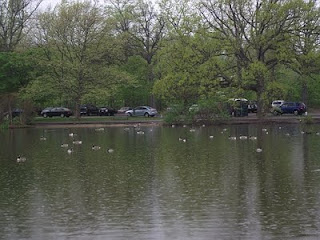 Friday night we went out to a local italian joint for dinner when these two assholes decided to show up and spoil my evening. 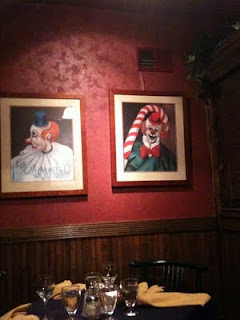 After dinner, it was back to the hotel for some shut eye.

The race started a 7 o'clock in the morning, so Matt and I were up and at it at 5. We headed to the race at 6, unpacked our gear, and picked up our bibs and timing chips.

My goal for this race was to run 50 miles. That's all I cared about. I also told myself that I wouldn't sit down. I wanted to always be moving. Moving meant I was accumulating miles. Plus, I knew that if I sat down during the later stages of the race, I probably would not want to get up.

Before I knew it, Matt and I were lining up at the start line and the race was on! The weather was pretty nice. The forecast called for rain showers, but for the time being, it was overcast and in the 60s. Pretty ideal running conditions.

Matt and I quickly established a good rhythm, running at about a 10:15 minute mile pace. The first hour seemed to fly by.

Every now and again, we would stop at the aid station and grab some treats to munch on. Staying hydrated and eating were two important elements of this race. However, its a juggling act on how much you should eat and drink. Eat/drink to much, you risk upsetting your stomach. But, eat/drink to little, and you're going to crash and burn.

By the time we hit the hour 2 mark, we have covered about 12 miles and I was feeling great! There was a leaderboard that was updated at the top of every hour that showed where the top 10 males and females stood. I told Matt that I really wanted to get my name up on that leaderboard during the race. 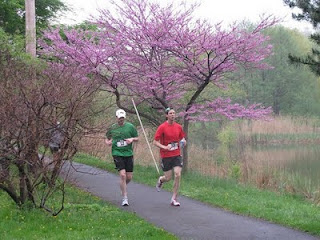 By the 4 hour mark, we had covered 23 miles. I was still feeling good, but Matt's left knee was starting to give him some trouble. Leading up to the race, Matt told me his knee was giving him some issues, but that he was hoping it would hold up during the race.

Unfortunately, it seemed the deeper we got into the race, the worse it got for Matt. I felt real bad for him. I could see the frustration mounting on his face. By the 5th hour, Matt and I had separated as his knee was forcing him to take walking breaks.

As the halfway point neared, I felt myself falling into a little bit of a rut. My energy wasn't at the same level it was earlier and I was starting to feel the effects of pounding the pavement for 6 hours. I saw Matt ahead of me as I approach the start/finish line. He turned around and starting pointing at the leaderboard.... there it was, my name listed in 10th place! Seeing this immediately lifted my spirits. I felt myself starting to reenergize and it couldn't of come at a better time! 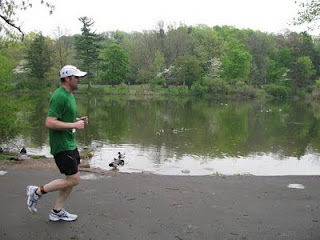 Around the 7th hour or so, it started to rain. I didn't mind though. It rained for about an hour, but it was nothing heavy... just your typical spring afternoon shower.

It was around the 8th hour that time really started to slow down. By this point, I had completed about 44 miles and I was really starting to feel it, mostly in my quads. But, I put my head down and kept on digging. My goal of 50 miles was so close and that was all the motivation I needed to continue.

Matt's knee on the other hand, had gone from bad to worse. Running was causing him a lot of pain so he resided to walking. Matt was faced with a tough decision. Should he continue on, or drop out of the race? After much thought, he decided the smart thing to do was to drop out. He didn't want to permanently mess up his knee. I was glad he decided to drop out, but hated to see the disappointing look on his face. Matt and I both knew that if not for his knee, he could of made it to 50 too. He ended the day with 41 miles in the bag, which is certainly nothing to frown about!

As the 9th hour approached, I was hurting pretty good. But, pain aside, I was really enjoying myself out there. I was doing something I never thought I would be able to do, and that felt really good! But, the mind games were never to far behind. It goes without saying that running is physical... but there is a huge, HUGE, mental side to running. Learning how to ignore the mental things is tough.

By the 10 hour mark, I had surpassed my goal of 50. The thought crossed my mind (many times) to just drop out of right there on the spot. I mean, why not? I had achieved my goal, right? I remember even looking at Matt and saying, "I don't know if I can run for another 2 hours." 2 more hours seemed like an eternity.

But for whatever reason, I knew I wouldn't be completely satisfied if I didn't run the whole 12 hours. This was a 12 hour event, and I knew if I dropped out early I would regret it. Plus, I had moved up to 8th in standings. If I dropped out, I knew I would fall off the leaderboard. So, I collected myself, and headed out for another lap around the lake.

The last two hours were down right brutal. Each foot strike sent pain shooting through my already toasted quads. They felt like there were on fire. To boot, I was starting to feel a bit nauseous. The only thing I could stomach was liquids and an occasional handful of gummy bears.

I was never so happy to make it to the 11th hour. The end was near! Amazingly, I started to feel a little pep in my step again, which was real nice. However, time was still passing at a snails pace.

Each lap I completed in the 11th hour was like a small victory.

Crossing the finish line for the last time was a great relief. I was D-O-N-E! My quads were completely destroyed, but I felt great! I had graduated from a marathoner to an ultramarathoner, and it felt pretty damn good!

A special thanks to Matt for coming out running with me and providing me with some much needed support at the end!

Posted by Doug Cassaro at 1:23 AM
Email ThisBlogThis!Share to TwitterShare to FacebookShare to Pinterest