I'm not sure when I first learned about rim-to-rim-to-rim (R2R2R), but as soon as I did, I knew that it was something I had to do. Why? Two reasons. One, it sounded like one hell of a challenge/adventure (45+ miles and 11,000 feet of vertical gain) and two, I had never been to the Grand Canyon. So...yea, what better way to see the canyon then to run through it, twice. For this epic journey, I teamed up with my badass running friends, Caitlin and Rachel, as well as Rachel's friends, Scott and Jill, that were our support crew/Grand Canyon experts. Their knowledge of the canyon was a massive asset and I can't thank them enough for all they did for us.
Caitlin,  Rachael and I started our R2R2R trek on the south rim of the canyon under darkness at 3am. We elected to go down South Kaibab as oppose to Bright Angel because it is a shorter, albeit steeper descent, to the Colorado River at the base of the canyon (7 miles vs 9.5 miles). The temperature was somewhere in the 30s when we began, but I was pretty comfortable. Even though our headlamps illuminated the trail well, we took our time making our way down the steep switchbacks. Having never been to the Grand Canyon, I could only imagine what the scenery must have looked like around us. I was excited to be finally running in the Grand Canyon, but the feeling was a bit subdued since the night still blanketed this massive place.

By the time we crossed the Colorado River, the faintest colors of dawn appeared and the silhouettes of the canyon walls slowly emerge. Shortly after crossing the Colorado River we arrived at our first big checkpoint, Phantom Ranch. Phantom Ranch is the only place along the R2R2R route where you can purchase food/limited supplies should you need anything else in addition to what you packed with you. We came prepared with plenty of food in our packs (PB&Js, Gu, gummy bears, M&Ms, etc), but we took this opportunity to refill our packs at the water spigot. Throughout the trail there are many water spigots that you pass and we began to treat these spigots as our aid stations. Without these spigots, it would make running R2R2R unsupported damn near impossible.
Departing Phantom Ranch, we were now on the North Kaibab trail and all that stood between us and the north rim was 14 miles and 5,750 feet of vertical climbing. Piece of cake, haha. The first few miles on North Kaibab took us through beautiful Bright Angel Canyon. As we pressed on the canyon eventually widened until we were left running through a huge valley full of desert brush. Ahead of us was the north rim, but the top was obscured by a thick layer of clouds. The weather forecast called for rain at some point and as much as we all didn't want to believe that it was going to rain, it was obvious that we were headed right for it. 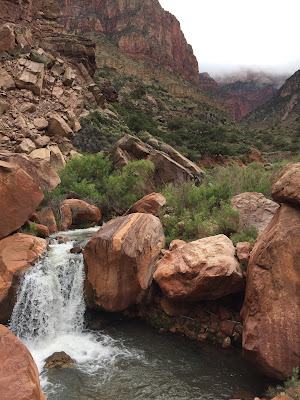 As we neared the north rim we heard from others on the trail that it was snowing on the north rim. Ummm, what? Still being thousands of feet below the north rim in fairly mild weather, it was hard for me to believe that we would encounter snow. The climb up the north rim was pretty gradual at first, but once we got past Roaring Springs, things got pretty steep. About 4 miles from the top, it began to rain. The dry trail below our feet slowly became a pretty muddy one. The temperature had started to drop quickly and I noticed that anytime I took a break, I would get very chilled.
1 mile from the top of the north rim I started to see patches of snow. Soon, the rain switched over to snow. The desert scrubs at the base of canyon were long gone and beautifully replaced by snow covered pines.
Finally, we reach the top of the north rim, but there wasn't much time to celebrate as we were all freezing cold. My fingers were so numb it was hard to open my baggie of gummy bears to grab a handful.
Frozen to the core, I was anxious to get down the north rim quickly to the warmer temps at the base of the canyon. After a muddy, quad banging 5 mile 3,600 foot descent, we were back in the sunshine and peeling off our layers. I had never experienced such radical climate changes. An hour earlier I was freezing my ass off in the snow and now I was sitting in the shade eating my PB&J to keep cool.
The return trip to Phantom Ranch was quick, as the trail was always trending downwards and with the exception of couple quick climbs, it was mostly flat. We made it back to Phantom Ranch a little before 4pm, which was our goal since the general store closed at 4. I purchased a cup of the famous Phantom Ranch lemonade I had heard so much about (all it was was Minute Maid out of a machine). Regardless, it was pretty damn tasty.
As we left Phantom Ranch, it was 9.5 miles and 4,400 feet of vert to the south rim. We knew we had about 4 hours of daylight left and we all had made it a goal to try and finish before nightfall. On tired legs, it was going to be a tall order to hike out of the canyon in that amount of time, but we were determined.
After a quick break at the Indian Garden campground, we began the hardest part of the Bright Angel trail. We had 5 miles and about 3,000 feet of climbing to go. The towering south rim loomed in front of us, teasing us with views of the top.
Surprisingly, I found my legs had a lot of life left in them and I was able to hike up the rim pretty well, all things considered. Every now and again it would rain on us, but nothing hard. Daylight was fading quickly as we reached the 1.5 Mile Resthouse. We popped on our headlamps for the final push and our goal. A little before 8pm we reached the trailhead of Bright Angel at the top of the South Rim. Job done! The three of us embraced in a group hug, shocked with what we had just accomplished.
I could not have picked a better group to run through the Grand Canyon with. The three of us compliment each other so well. We were all so focused on completing this journey together. Our morale throughout the day never faltered and we reminded positive through the hard patches.

The following morning we returned to the south rim to gazed at this amazing place. For me, it was the first time I saw the Grand Canyon from this perspective. This place is massive and utterly gorgeous. Had I seen this view of the canyon before I decided to run R2R2R, I would have been way more scared. Ignorance is definitely bliss.
I can't wait to return to the Grand Canyon. This place is absolute magic. I definitely would love to run through the canyon again, but perhaps just one crossing next time... 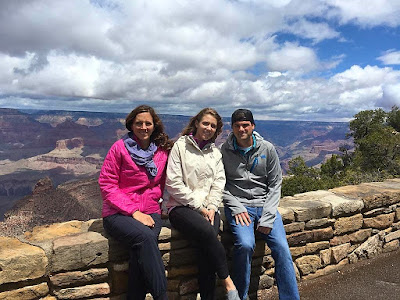 Posted by Doug Cassaro at 5:15 PM
Email ThisBlogThis!Share to TwitterShare to FacebookShare to Pinterest