The past few months

Hello? Can anyone hear me? Does this thing still work? It's been awhile since I've done a blog post. A lot has happened over the past few months and I will try my best to cover it all (mostly with pictures.) The biggest change was my move from Washington to Dallas. I took a new job with Southwest Airlines and have loved every minute of it since I've started. It's an awesome company to be a part of and I work with some really great people. Of course, I miss DC, but I've already been able to get out there a few times to visit. In fact, the last time I was there I was able to sneak in a quick run with friends.

After I moved to Texas and before I started my job, I went on a week long runcation in early September with my friend Cathy. We both signed up for the The Rut 50K, a stupid crazy mountain race in Big Sky, Montana with over 10,000 feet of vert (more on that later.) But, before we headed to Big Sky we spent 4 days camping, trail running, and sightseeing in Grand Teton and Yellowstone. If you have not been to either of these parks, I highly recommend you check them out. The scenery is unreal and the trails are epic!
After Grand Teton and Yellowstone, we headed to Big Sky for The Rut 50K. The Rut is like no other race I've ever experienced. From the start at the Big Sky ski resort, the course has over 10,000 feet vertical gain with the highlight of summiting Lone Peak, which is over 11,000 feet up!
This was my first mountain race and to give myself a better idea of what I was getting into, I also signed up for the Vertical Kilometer (VK) which was two days before the 50K. The VK was a 3 mile "run" that started at the base of Big Sky and went straight to the top of Lone Peak, a total of 3,600 feet of vert. It was brutally awesome. The views once you got above the tree line were incredible. 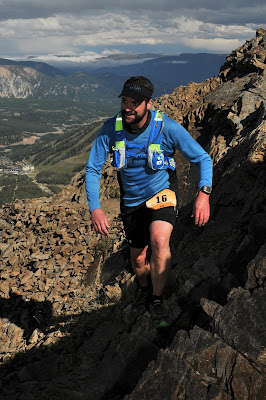 After the VK, I had a lot more confidence going into the 50K, but that isn't to say the race was easy. I just wanted to enjoy a beautiful day in the mountains. It was cold at the start (30s) and didn't warm up too much during the day. But, we had blue skies and views that couldn't be beat. I spent 10 painfully long hours on the course, but I couldn't care less about the time. My only goal was to finish.

About two weeks after The Rut,  I ran in my first race in the Dallas area, the Tour des Fleurs 20K. The course started/finished at the Dallas Arboretum and did a loop around White Rock Lake. It was an overcast and humid day, but I ended up having a better run than I expected. 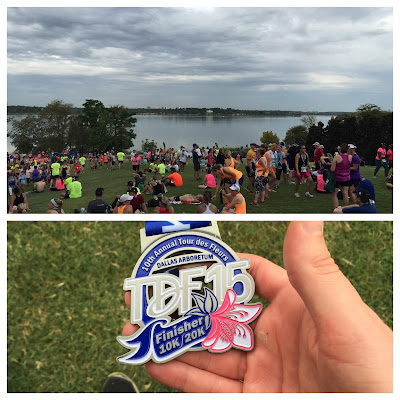 In October I ran one of my favorite races for the 4th time, the Chicago Marathon. I ran for the Alzheimer's Association in honor of my grandmother, who recently passed from this very sad disease. My sincerest thanks to all that donated. It was a beautiful day for the marathon, but unfortunately I was undertrained for this race and suffered a bit in the second half. Nonetheless, I was so happy to get another Chicago Marathon finish. If you have never run this race, add it to your list.
A couple weeks before Thanksgiving I ran in my first trail race in Texas, the Rockledge Rumble 50K. Much like Chicago, I was very undertrained and had no business running it. However, I was signed up for it so I had to go out there and at least give it my best effort. The course was on some pretty sweet mountain bike trails along Grapevine Lake and I enjoyed them for the first 20 miles until I hit a wall. The last 10 miles or so sucked and I was happy to collect my finisher's medal and then drowned myself in pity beer.

Rockledge was the wake up call I needed to get my ass in gear. I was signed up for the Dallas Marathon about month later and I wanted to have a stronger race. So, in the weeks leading up to the marathon, I upped my training and snuck in a little speedwork. On race day I was still unsure where my fitness was so I went out at a pretty conservative pace, about 9 min/mile or so. I maintained that through the halfway point and still felt I had plenty in the tank, so I let it rip. By the end of the race I was running about 8 minute miles. I finished in around 3:48, much faster than I expected. It was a nice surprise and a great confidence boost to take into the new year.
So, that's what I've been up to for the last few months. I'm definitely looking forward to 2016 and I've already signed up for a few races in the spring that should be a lot of fun. 2015 had its ups and downs, but I learned many valuable lessons that I can hopefully apply to my training in the future. I hope you all had a strong 2015 and I wish you happy runnings in 2016!

Cheers!
Posted by Doug Cassaro at 7:34 AM
Email ThisBlogThis!Share to TwitterShare to FacebookShare to Pinterest