This race should have been called StumpRock, as there were many more rocks than tree stumps to contend with on this mega 50K course. Trail running is about exploring. It's about seeing new places and challenging yourself on different terrain. StumpJump was exactly what I needed to shake things up. It made me fall in love with trail running all over again.

I didn't know what to expect on the course. I heard that it was pretty runnable, but with 4,400 feet of vertical gain (which actually turned out to be more like 5,600), I knew there would be some power hiking tossed into the mix.

My weekend started out with traveling to Atlanta on Thursday to meet up with my friend Cathy, who was also running. On Friday, we drove up to Chattanooga and headed straight for the bib pickup. The pickup was suppose to be held at a park, but due to the threat of severe weather, they opted to move it indoors at a retail store. As it would turn out, all the forecasted weather blew out by midday. However, I think the decision to relocate was a smart move. Cathy and I made up for it by checking out the park after we picked up our bibs.

The race didn't start until 8am, so we didn't have to get up too early the following morning. The start line was buzzing with excitement, albeit a bit chilly (not that I minded). There were a couple fires going so I stayed near one to keep warm.

A high five to Cathy to wish her well and we were off! I had no time goal for the run. I was just hoping to run strong throughout the day and work on my downhill running. It was pretty cluttered at the start which led to big running congo lines for the first half of the race. It was frustrating to be stuck in these long lines, but in hindsight it was for the best as it kept me from running too hard at the beginning.

The course was a lollipop design, with the stick being about 10 miles and the delicious candy loop measuring in at just under 10. The stick was along the Cumberland Trail and the candy loop was on the well-known Mullens Cove Loop. Having never run the trails of Tennessee, I didn't have many expectations. Yet, what expectations I did have were blown outta the park! The trails were absolutely gorgeous. There were some fall colors, but for the most part it was still a very green and vibrant forest. In fact, the forest was so dense in some parts I wasn't sure what time of day it was anymore. Mullens Cove was full of beautiful, lush ferns. For whatever reason, I love running through them. Some rocks on the trail were coated with moss so I always had to be on my game. I caught my toe many times on the rocks and roots along the trail and finally took a nice digger around mile 24. 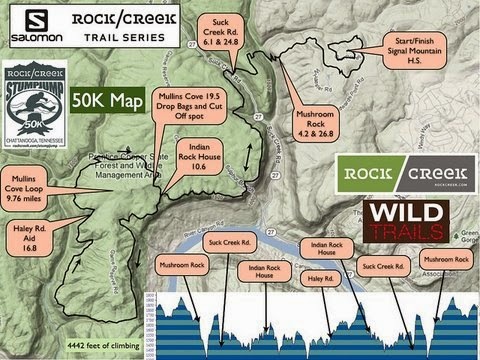 A good section of trail was along a ridge line near the Tennessee River. Unfortunately, the thick tree line covered most of the vantage points. I tried to sneak peak were I could, but taking your eyes off the trail for too long only spelled trouble.

The stick of the course had the most vert, but was still fairly runnable. Mullens Cove gave me a nice opportunity to lengthen my stride and punch in a few faster miles. The aids stations were stocked with the usual ultra fare and enthusiastic volunteers. My only complaint, the serving cups for liquids were very small (dixie cups). I'm not sure if this was in the race's effort to lower its environmental footprint, but my feeling is, if you're gonna put cups out, might as well use bigger ones. I had a water bottle full of Nuun and was wearing my hydration pack, so it wasn't much of an issue for me.

In addition to working on my downhill running, I'm trying to learn how to get through aids stations a bit more effectively (read: FASTER). I find that I can waste a lot of time at aid stations during trail races. At StumpJump, I felt I was doing a good job getting in and out quickly. However, this came back to bite me when I forgot to stop at my drop bag at mile 19 to restock my pack with Gu and Nuun. I realized my mistake shortly after leaving the aid station, but in my mind I was too far to turn around and go back to it.

I felt great for about the next 3 miles, but then I started to hit a wall and had no nutrition to fend it off. I never was able to dig myself out of the low I was in which made the last few miles of the race pretty rough for me. However, I find running through the lows is good practice. You're not always gonna feel fresh as a daisy on a run, so it's good to learn how to run through the pain and negative thoughts.

Soon enough I emerged from the trail and back onto the paved road that led to the finish line. I remembered from the start of the race that the finish was about a half mile from the trailhead, so I pushed hard and was able to sneak past a few runners in the process. I crossed the line in 6:21:07 tired, but satisfied. With the exception of forgetting to stop at my drop bag, I felt I ran a smart race. The course was a little short (not that I minded), but I feel the extra vertical made up for the missing mile or so.

There was nice BBQ at the finish and to my delight, they had veggie burgers! The only thing that was missing was a beer garden. Cathy came burning into the finish about an hour later looking super strong. She had only run her first ultra a few months prior, but I definitely think she has caught the ultra bug!

Overall, I was very impressed with StumpJump. The race staff was great and the course was beautiful. I highly recommend it!

On a somber note, about a week before the race, UVU Racing Team Principal Basti Haag tragically lost his life doing what he loves, mountain climbing. I carried his name with me during my run and I'd like to dedicate this run in his memory. While I didn't know Basti well, his love and passion for the outdoors and his determination and drive to push his limits is something I admire. May he rest peacefully. UVU Director Gerhard Flatz wrote a beautiful eulogy for him and I encourage you to read it if you have a moment.

I also learned shortly after the race that a runner had collapsed on the trail. No runner ever likes to hear news like that and my heart sank after I heard of his passing. The runner's name is Eric Jacks and if you go to Wild Trails Facebook page, you can read a beautiful message written by one of his family members. RIP, Eric. The running community mourns with your family.
Posted by Doug Cassaro at 1:38 PM
Email ThisBlogThis!Share to TwitterShare to FacebookShare to Pinterest